It is hard to believe that the fluoroscope (essentially an x-ray machine used to produce real-time moving images viewed on a screen of the internal structures of a patient) was used to “help” better fit shoes to your feet! From the 1920 to about 1970 you were able to irradiate your feet with x-rays in order to see if you had enough “wiggle-room” in your new shoes! Crazy.
So, the whole concept of Fluroscopy dates back to you know who, Wilhelm Röntgen. We chatted about him here in our blog. He is also responsible for discovering the interesting phenomenon of barium salts fluorescing when exposed to x-rays (see here in our blog).
Soon after Rontgen’s discovery was announced, Thomas Edison (the light bulb guy) decided he could improve on this whole x-ray thing as these rays were produced by a “glass tube apparatus” – something he knew a lot about. After setting his team to work – he had a team as he was a very successful man in those days following his 1879 patent of the light bulb – they soon discovered the risks of working with x-rays. Edison decided to remove himself (literally!) from x-ray research. But before he did he developed one of the first (and arguably the most advanced in it’s time ) fluoroscopes along with a full line of x-ray kits. He also coined the term “Fluoroscope”. Interesting man…

Fluoroscopes have come a long way over the years and are still used today in areas such as orthopedic surgery, gastrointestinal investigations, and angiography but, of course, the dose of x-rays a patient receives is minimized and closely monitored. Have a look at this machine from Siemen’s. “Beam me up Scotty!”.
So how did all of these machines suddenly flood the shoe retail industry? Good question. As it happens, following the development of the high vacuum, hot cathode, tungsten-target x-ray tube by William Coolidge in 1913 the interest for a portable and reliable machine increased dramatically with the advent of the First World War. The successful deployment of numerous machines during the war to aid army physicians spurred the manufacturing industry to mass produce them. After the war, the impact the fluoroscope had on army medicine flowed into community practice. 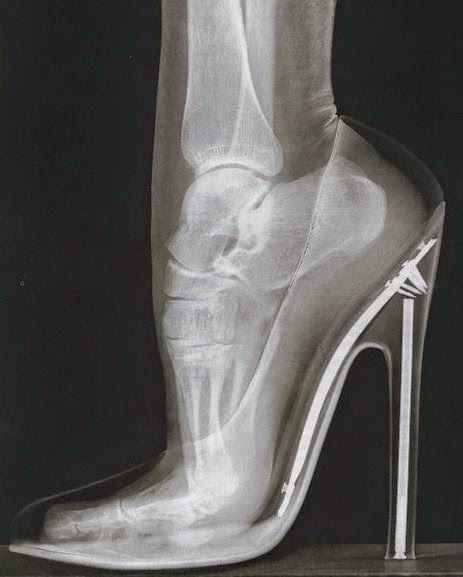 Now for the fun part, using Fluoroscope in a sentence by the end of the day:


Serious: Bob, did you know that the foot-o-scope was a modified fluoroscope used to view ones feet when fitting new shoes which delivered on average 13 Roentgens for every 20 second exposure?


Less serious: I heard grampa grumbling he can never find shoes that fit right anymore since they banned fluoroscopes in shoe stores. What is a fluoroscope mommy?


Listen to High Heels to decompress and I’ll see you in the blogosphere.