What a great movie from the eighties. One always thinks of twins as identical or monozygotic. But twins can be dizygotic or fraternal meaning that they develop from two separate eggs and share the same womb. In this case they are more analogous than anything else – as in the movie Twins with Arni and Danny (see the trailer here for a refresher).


In my most recent set of posts I have been talking about Bradford Hill’s criteria for causality – also know as cause and effect (see here for first post). So far we have covered strength, consistency, specificity, temporality, dose-response, plausibility, coherence, and experiment. Today we are going to talk about analogy – the ninth and final criterion.

Again it is an easy one today. Perfect for a Friday. When considering an association for causality one can look for similar relationships and essentially judge by analogy. If causality was shown in similar or analogous evidence to the relationship you’re interested in then this would support your hypothesis. With the effects of acetaminophen (Tylenol) on pain clear to us we would surely be ready to accept similar evidence with another analgesic drug in pain relief. 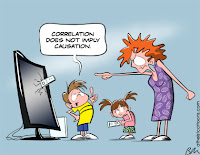 None of the nine criteria can bring indisputable evidence for or against your hypothesis of causality and none can be absolutely required. What they can do, with greater or less strength, is to help you decide – is there any other way of explaining the relationship of interest than cause and effect?
That’s it! All nine criteria. Now it’s time to try and apply them to a real life example. Let me know how it goes.
Have a listen to “Ready to Start” by Arcade Fire and…
… I’ll see you in the blogosphere.
Pascal Tyrrell

Guard or inmate? Who would you like to be?

In my most recent set of posts I have been talking about Bradford Hill’s criteria for causality (see here for first post). So far we have covered strength, consistency, specificity, temporality, dose-response, plausibility, and coherence. Today we are going to talk about experiment – the eighth criterion.


This is an easy one (and it’s a Friday… Perfect!). Can the condition of the association of interest be altered (prevented or ameliorated) by an appropriate experimental / semi-experimental regimen? If so, then this would lend support to the notion of causality.


That’s it. Now consider the infamous Stanford Prison Experiment that has etched its place in history, as a notorious example of the unexpected effects that can occur when psychological experiments into human nature are performed.The experiment was a study of the psychological effects of becoming a prisoner or prison guard. The experiment was conducted at Stanford University on August 14–20, 1971, by a team of researchers led by psychology professor Philip Zimbardo using college students. Needless to say the experiment got out of hand and participants were harmed in the research process. Whoops! Not good.


The Stanford Prison Experiment led to the implementation of rules to preclude any harmful treatment of participants. Before they’re implemented, human studies must now undergo an extensive review by an research ethics board or institutional review board.

You may be able to show causality by an experimental regimen but at what cost? Be careful and think about research ethics before you leap into an experiment.


… I’ll see you in the blogosphere!