OK who hasn’t made rock candy as a kid? No? Give it a try. Maybe you have a little brother or sister you can impress. All you need is a super saturated solution of sugar, a surface for crystal nucleation (string), and lots of time…


Now what if you were to apply this technique to obtain crystals of DNA? I don’t suggest that you eat it as a treat but you could possibly try X-ray crystallography.


The challenge is that DNA, unlike proteins, is an exceedingly large molecule which does not lend itself to crystallisation. The result is a highly viscous suspension of spiderweb-like filaments. However, it is this very suspension that the DNA molecules were deduced to be neatly aligned alongside one another by studying the X-ray diffraction patterns. This initial challenge was successfully overcome by Rosalind Franklin. Her hard work then laid the ground work for Watson and Crick to piece together the puzzle of DNA structure (winning the 1962 Nobel Prize along with Wilkins).


Now the x-ray crystallography imaging technique is no pic-nic! It was first described by the Australian father-and-son duo William Henry Bragg and William Lawrence Bragg. Essentially x-rays are projected onto a crystalline solid and when analyzing the diffraction patterns it is possible to determine how its molecular atoms are positioned in relation to one another. This is due to x-rays having very short wave-lengths (see x-rays in the blog) and the mathematical analysis of predictable diffraction from the three dimensional structure of the crystal. It was Lawrence Bragg who developed the equation to describe this diffraction and is now known as Bragg’s Law. He and his father won the Nobel Prize for this work in 1915.


I used to listen to New Order back in the day and they are still singing (and dancing?) with a more recent release of Crystal by New Order. So, listen to the song while making rock candy and maybe you too will come up with a brilliant idea worthy of a Nobel Prize by the time the crystals are big enough to eat.


Now if you remember the rules:


1- I introduce and discuss a word.
2- You have to use the word in a sentence by the end of the day. No need to use it in the correct context – actually out of context is more fun and elicits a more entertaining response!


Today, we have to use “Bragg” in a sentence. Here are two examples to help you along:

Serious: “Hey Bob, did you know that if you used a saturated sodium salt solution of DNA instead of sugar to produce crystals we could then do some x-ray crystallography for fun and apply Bragg’s law to determine the molecular structure…”
Less serious: “Bob, I don’t want to Bragg but my crystals are way bigger than yours…” 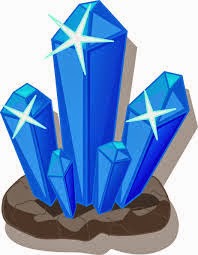 See you in the blogosphere,
Pascal Tyrrell